The History of Modern Concrete

The History of Modern Concrete

While concrete might be ubiquitous today, it actually has a long history that dates back to Ancient Egypt. The same principles were used to make the materials you see in bridges and buildings today and the Egyptian pyramids over 5,000 years ago — with some variation. The Ancient Egyptians used the earliest forms of concrete with a mixture of mud and straw for the bricks and gypsum and lime for the mortar.

Here’s a short history of concrete from its use in those famous pyramids to today:

A few thousand years after the Ancient Egyptians were making the pyramids, the Romans were using concrete in the Colosseum, the Pantheon and other notable buildings between 300 BC and 476 AD. The Romans used admixtures in their concrete (a practice still used today) and used animal products in their cement.

Modern concrete uses what is known as Portland cement, which uses a paste made from water and cement to coat aggregate and sand. The paste hardens and binds it all together.

Portland cement was invented in 1824 by Joseph Aspdin in England. He chose the name for a nearby rock quarry that was known for producing strong stone.

Not all concrete is made alike. Some concrete is better suited for large buildings and industrial facilities because it can withstand greater weights and pressures.

In 1836, the first strength testing for concrete took place in Germany. The test measured both tensile and compressive strength. These are values that say how well the concrete can resist both tension and compression, and the result is in pounds per square inch, or psi.

The first reinforced concrete bridge, concrete street and concrete high-rise were all built in the late 1800s and early 1900s. The Alvord Lake Bridge was built in 1889 in San Francisco. Though it may have needed concrete repair over the years, it is still standing today.

The first concrete street was built in America 1891 in Bellefontaine, Ohio. The historic street is still in use. The Ingalls Building was the first high-rise, and it was built in 1903 in Cincinnati, Ohio. It is 16 stories high.

The first concrete homes were also built in 1908 in Union, New Jersey. The homes are still standing, but concrete has only recently become a popular choice for home construction.

Before Ready Mix, concrete had to be mixed at each job site as needed. In 1913, the first load of pre-mixed concrete was delivered to a job site in Baltimore, Maryland. The capability to order concrete already mixed at another facility made huge changes in the construction industry.

Concrete doesn’t just come in boring grey. You can order it in a wide variety of colors for a number of building applications.
The first colored concrete was created by L.M. Scofield in 1915. It used wax, color hardeners, sealers, integral color and chemical stains to produce the effect.

John Crossfield got a patent for concrete overlay in 1938, and he used it to create a covering for ship decks that used Portland cement, latex, and other ingredients. 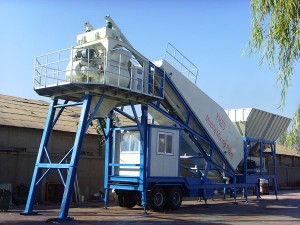 Polished concrete came to the United States in 1999 by way of the Swedes. It was first used in a warehouse floor for the Bellagio Casino in Las Vegas. However, it has now become a popular choice for floors and other building projects.

Knowing the history of concrete can help you better appreciate this versatile building material. At Pride Development and Construction, we are experts in concrete and can help you with any project, whether it is new construction or concrete repair. We have a range of tools for concrete restoration, helping you to make your concrete strong and beautiful again. Call us today to learn more about how we can help your business.