You need a Phoenix concrete expert to install your concrete structures to ensure that they are strong and have a long lifespan. Even minor mistakes in the mixing of the concrete, the curing or the placement can lead to major problems requiring concrete repair later. Major mistakes such as lack of concrete reinforcement can cause the structure to crumble, requiring total concrete restoration.

Here are a few signs that you are experiencing concrete failure:

Scaling occurs when the surface of the concrete flakes off in depths of up to 5 mm. It is caused by a chemical reaction to the components in de-icing salts by concrete with inadequate strength. De-icing salts aren’t a threat in Phoenix, but scaling can still be caused by reactions with some fertilizers. Scaling can also be caused by overworking the surface of the concrete or by finishing it while there is still bleed water present.

Some cracks can be easily repaired, but others indicate structural problems. You’ll have to contact an expert to see what kind of Phoenix concrete repair is needed.

Crazing refers to a series of fine cracks on the surface of the concrete. It is caused by the surface layer shrinking, which happens in the early stage of concrete curing. Crazing generally appears within the first week after placement of the concrete, often after the first day. It is an aesthetic issue that does not affect the structural integrity of the concrete, and it can be easily repaired.

Just like its name suggests, blistering refers to a series of low, hollow bumps on the surface of the concrete. The can be as small as a dime or have a diameter as large as three inches. Blistering is usually caused by pockets of air being trapped by a skin of mortar, but it can also be caused by troweling too soon. The surface is then sealed and is unable to release any air that is trapped by wet concrete. 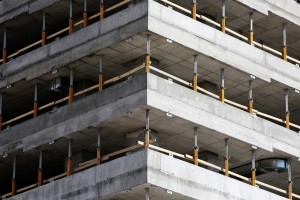 By working with an experienced concrete expert, you can avoid these and many other sources of concrete failure, saving you thousands in concrete repair and concrete restoration. Pride Development and Construction has been offering concrete placement and repair services in Phoenix for many years, and we are recognized experts in the field. We perform everything from concrete reinforcement to restoration. Whether you are overseeing a new construction project or restoring a crumbling structure, we have the solutions you need, call us today to learn more.