How Carbon Fiber Can Change the World

How Carbon Fiber Can Change the World 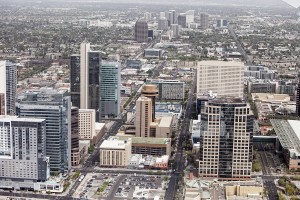 How Carbon Fiber Can Change the World
Carbon fiber has many potential uses — uses that could actually change the world for the better!
Phoenix, Arizona

Carbon fiber is a little-known and physically tiny material that has huge strength and even bigger potential.

The fiber is very similar to fiber that is found in cloth, except it is made of strands of crystallized carbon atoms that are bonded in a pattern that makes the strand stronger even than steel. The fibers can be woven together into strands like yarn, which can then be woven together into sheets like fabric. The sheets can then be coated in materials like resin or concrete to create a usable form.

Carbon fiber reinforcement is a popular application of this strong but lightweight material. However, it has many other potential uses — uses that could actually change the world for the better. Here’s how:

The automotive industry is one of the biggest consumers of oil, both for use as engine oil and for gasoline to power vehicles. The bigger and heavier a vehicle is, the more oil and gas it must consume. Finding ways to reduce dependence on oil — and to reduce the depletion of natural resources — often focuses on the automotive industry and things like making more fuel-efficient vehicles.

Carbon fiber may be the solution. The material is five times stronger than steel, yet it weighs two-thirds less. If vehicles were made of carbon fiber, they would weigh hundreds of pounds less, and they would use far less fuel.

Lighter vehicles are also able to be powered by electric engines, which can help save even more fuel and oil.

Using carbon fiber in vehicles instead of steel could help resolve both the oil crisis and the environmental crisis. Some cars are already using carbon fiber components, such as the BMW M6 and the Chevrolet Corvette ZR1. The reason more cars don’t use carbon fiber is that the material is more expensive than steel and other materials. However, the cost is going down steadily over the years.

In both instances, carbon fiber can help to reduce waste. By building stronger structures to start, there is less need to make repairs or to restore it later. In restoring older buildings, we reduce the need to bulldoze and start new construction.

Carbon fiber helps to create longer-lasting buildings to reduce waste and expense. Corporate owners can protect themselves against financial losses. The economic impact can have far reach, allowing for the addition of jobs, the development of new products, or the expansion of the business into new markets.

Pride Development and Construction are experts in carbon fiber reinforcement and industrial construction in Phoenix. We can see a project through from the beginning to the final stages of construction, or we can help to restore older structures. Our complete lineup of services also includes concrete work (such as cutting and placement), floor and tank coatings, structural retrofitting and more. Call us today to find out how carbon fiber can make the difference to your business — which can help start making a difference for the planet.